Someone told you. A friend, a parent, a relative, a preacher, a teacher, a children’s church volunteer, a roommate, a small group leader. It could have been several different people tell you before you got it, but someone told you.

“Jesus traveled about from one town and village to another, proclaiming the good news of the kingdom of God.”  Luke 8:1

The word gospel means good news. Jesus preached the gospel because the gospel is good news about the kingdom of God. It’s the best news ever. It doesn’t matter what you have done. How much you’ve done wrong or how much wrong has been done to you.

The cross is the central part of our story. It’s the epicenter of God’s power. When an earthquake happens they say it’s 47 miles off the coast two miles deep, the epicenter of our freedom is on a hill called calvary, and it silences the enemy. The cross is a place of power and the enemy will fight you down to the last eighth of an inch to keep you from touching it, and it touching you.

“May I never boast except in the cross of our Lord Jesus Christ, through which the world has been crucified to me, and I to the world.”  Galatians 6:14

In Numbers 21, the people of God are in the wilderness after slavery in Egypt. They’re getting very impatient.

“They traveled from Mount Hor along the route to the Red Sea, to go around Edom. But the people grew impatient on the way; they spoke against God and against Moses, and said, ‘Why have you brought us up out of Egypt to die in the wilderness? There is no bread! There is no water! And we detest this miserable food!'”  Numbers 21:4-5

God has freed them from slavery, set them on a journey, the long way, so he can show his greatness. He’s even giving them food. In the midst of the journey, their thanks and worship to God is, complaining! God was so frustrated with their sinfulness that:

“Then the Lord sent venomous snakes among them; they bit the people and many Israelites died.”  Numbers 21:6

Aren’t you glad we don’t live under the Old Testament old covenant anymore? We’d have snakes everywhere. That could be our life, because we still say the same things to God. “God why are you doing this to me today?”

“The people came to Moses and said, ‘We sinned when we spoke against the Lord and against you. Pray that the Lord will take the snakes away from us.’ So Moses prayed for the people.The Lord said to Moses, ‘Make a snake and put it up on a pole; anyone who is bitten can look at it and live.’ So Moses made a bronze snake and put it up on a pole. Then when anyone was bitten by a snake and looked at the bronze snake, they lived.”  Numbers 21:7-9

We don’t understand why God does exactly what he does. But what he did here was put something in motion that involved their participation. He was foreshadowing Jesus. So he had the people make this bronze snake and put it on a pole. Then if you get bitten you had to come look a the pole and you would live. Some could have said, “That seems dumb. Why do we have to come to the thing and look at the pole? I don’t want to look at the pole. I don’t want to go way over there. I’m going to try to find another way to be saved and live.”

You can do that, but there is a pole. There is hope and life for anyone who looks on this pole, because God works and then we have to participate.

Then Jesus years later comes on the scene in John 3. The place where the most famous passage of scripture resides. And here’s what Jesus has to say about himself:

“Just as Moses lifted up the snake in the wilderness, so the Son of  Man must be lifted up, that everyone who believes may have eternal life in him.”  John 3:14-15

That’s the setup for the most famous verse in the Bible. John 3:16. This is the big time version of the bronze snake.

There is good news! The Son has been lifted up and we can look on him and be saved. How can you look upon the cross?

Over the next few weeks, we’ll teach you how to share the good news, but we have to do a couple of things first and that is gather around what the good news is and what we must do to be saved. The four statements from John 3:16, teach us what God has done and how we can look upon it.

You might say, God could never love me. It’s not about you. God’s love isn’t based on what you do, It’s based on what Jesus has already done for you.

“Whoever does not love does not know God, because God is love. This is how God showed his love among us: He sent his one and only Son into the world that we might live through him. This is (real) love: not that we loved God, but that he loved us and sent his Son as an atoning sacrifice for our sins.”1 John 4:8-10

Before we even love God, he loved us. This has to become the foundation of your life. You’ve got so much stress in your life and no stability, because you’ve got a shaky foundation. It’s because you are building your life on something that can change.

It doesn’t say God sent just a good man or an angel. It doesn’t say he sent a prophet, it says He sent His Son. He cared enough to send the very best.

“The wages of sin is death, but the gift of God is eternal life in Christ Jesus our Lord.” Romans 6:23

No one measures up to perfection. We’ve all made mistakes. When you break God’s laws, you pay God’s penalties. That means I deserve to be punished for the things I’ve done wrong in my life. That’s the bad news.

Here’s the good news. Every sin has already been paid for. That’s what Jesus Christ did on the cross. He took all our sin.

“For God took the sinless Christ and poured into him our sins. Then, in exchange, he poured God’s goodness into us!”  2 Corinthians 5:21 (TLB)

“(Since salvation) is by grace, then it cannot be based on works; if it were, grace would no longer be grace.”  Romans 11:6

God has made an offer to you. It’s an incredible proposal. He says this, “That whosoever believes in Him should not perish.”

“Now God says he will accept and acquit us—declare us “not guilty”—if we trust Jesus Christ to take away our sins. And we all can be saved in this same way, by coming to Christ, no matter who we are or what we have been like.”  Romans 3:22 (TLB)

There’s only one way we’re getting into heaven. By trusting Jesus Christ. The word there in Greek is “to trust in, to cling to, to rely on, to adhere to.” Begin to trust God in every area of your life. Trust Him with your finances, relationships, future, dreams and ambitions. Trust God with your problems. That’s what it means to really believe. It means more than just knowing about Him. Believing means we want to know God.

When we believe and trust,

“We are justified freely by his grace through the redemption that came by Christ Jesus.”Romans 3:24

The Bible says that Christ’s death justified you. Justified means “just as if I’d never sinned.” It’s even more than forgiveness. It’s forgotten, it’s wiped out.  It’s like it didn’t even happen.

Then it says “Through the redemption that came by Christ Jesus.” Redemption is an old slave trading term. The word “redemption” means to buy somebody’s freedom. If you were a slave, standing on a block to be auctioned off and someone raises their hand and says “I will pay a hundred thousand dollars for you.” They say, “Sold!”

You come off the auction block and the buyer says, “Ok, you’re free to go.” You were just paid for, but now you are given freedom. That person is your redeemer. They paid to set you free.

The promise is eternal life. You were made to last forever. One day your heart’s going to stop. That’ll be the end of your body, but it’s not going to be the end of you. But here’s the bottom line: if you want to spend eternity with God in heaven, you’ve got to build a relationship with Him now on earth. You don’t ignore him your entire life and then at the end go, “By the way, I’d like to come and spend eternity with You.” You develop a relationship with Him now. Maybe you’re afraid that if you put your trust in Him, you’ll mess it up and not make it in. It’s God who makes sure you make it.

“We are now members of God’s own family… Now we live in the hope of eternal life because Christ rose again from the dead. And God has reserved for his children the priceless gift of eternal life; it is kept in heaven for you… And God, in his mighty power, will make sure that you get there safely to receive it because you are trusting him.”  1 Peter 1:3-5 (TLB)

It’s not dependent upon you. It’s by the same power that rose Christ from the dead. Jesus said just come with your doubts and questions. You don’t have to have it all figured out. You don’t have to have great faith. Just have a little faith.  It’s not the size of your faith that matters. It’s the size of your God. You put a little faith in a big God and you get saved.

Check back and review what we talked about last week. Anything from the interview with Ted McMillin that has stayed with you?

In this series we’ll do some coaching and equipping so you can confidently share your faith. However, if you know John 3:16, you know enough to tell someone what you believe. With whom can you share John 3:16? 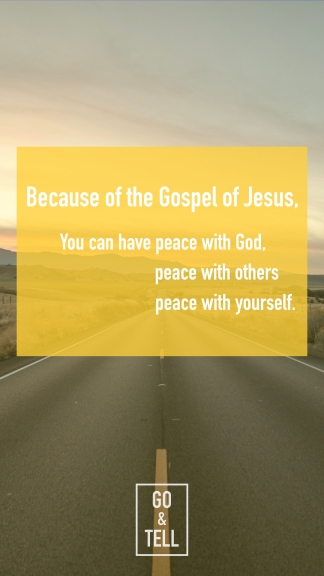 On-Demand starting each Saturday at 5pm